Cona Coffee with Kathleen Byron – The Small Back Room (1949)

My friend Charles Barr is an eminent film professor with an obsession with Cona coffee makers on film. I fully endorse this and always try to make a note when I spot them on screen as in films such as The First Born (1928) and Brief Encounter (1945). One of our favourite uses of the Cona coffee maker is in Michael Powell and Emeric Pressburger’s The Small Back Room (1949).

The film is set in 1943. Sammy Rice (David Farrar) is one of Whitehall’s ‘back room boys’  – a group of scientists working on a host of experiments intended to aid the war effort. Sammy is bitter and cynical, with a drink problem and a false foot which causes him pain (and which drives him to drink). He lives with Susan (Kathleen Byron), who’s secretary to Sammy’s boss, Waring (played with oily joviality by Jack Hawkins). To appease the censor, Susan ‘lives across the hall’ from Sammy, but in Nigel Balchin’s original novel it was explicit that the unmarried couple lived together.

As the film opens, young Captain, Stuart (Michael Gough) comes seeking help regarding a new bomb being dropped by the Germans. He’s pointed in Sammy’s direction and Susan offers to take him to find Sammy, who they track down in his local pub. Rather than stay in the pub, where they can be overheard, and where Sammy will continue to drink, the trio retreat to Sammy’s flat where Susan offers to make coffee. We cut from the pub to Susan in Sammy’s kitchen, where she’s brewing up coffee using a Cona coffee maker. 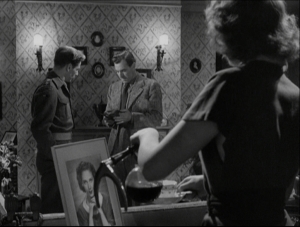 The Cona was invented around 1910 and was the first all-glass coffee maker. It’s a British design classic and uses a vacuum method that gently pushes, and then pulls, the hot water through the coffee grounds. The coffee serves as its own filter and it produces a smooth and clean tasting coffee. In the film we see Susan stirring the coffee with a glass stirrer and then removing the top chamber before pouring the coffee from the pot itself. Like any good hostess, she takes the pot into the living room for pouring, so Stuart can appreciate just what he’s getting to drink.

As Charles points out in his commentary for the excellent Criterion DVD release for the film, the drinking of coffee, particularly made using a sophisticated device such as the Cona (rather than coffee powder or liquid essence) sets Sammy and Susan apart from the tea-drinking apparatchiks of Whitehall with whom they work (there is constant tea-drinking in the office). There is no coffee-making in Balchin’s original novel so this is something that Powell and Pressburger added for the film and it serves as a badge of the filmmakers’ continental sophistication.

It’s also worth noting the Cona’s similarities to scientific equipment – and in fact, Sammy’s demonstration during the Minister’s visit to the Small Back Room latter in the film points this up, as can be seen here.

The Cona coffee maker was also used as part of the film’s promotion and an official ‘tie-up’ with Cona was instigated. Please forgive the quality of the image below, taken from the film’s press campaign book (held in BFI Special Collections). It was suggested that cinema exhibitors and stockists of Cona cofffee makers team up to use use ‘this special “still” of lovely Kathleen Byron using a Cona Coffee Machine’.

Addendum April 2020: The blog Night in the Lens has just published a wonderful round-up of siphon coffee makers on screen, looking at their meanings and use across different countries and national cinemas – check it out!

My Tweets
Join 16 other followers