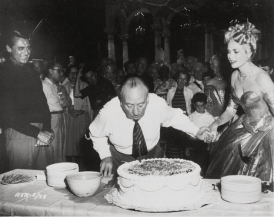 Happy Birthday Alfred Hitchcock! Hitch loved eating and drinking and there are many memorable food moments in his films. My BFI colleagues and I rounded up a few of them here, for 2012’s ’39 Steps to the Genius of Hitchcock’ project. At the urging of my boss, Robin, I also tried my hand at cooking one version (there are a couple around) of Hitchcock’s Quiche Lorraine for a little online film. If you’d like to try the recipe yourself, there’s a link over to the right. I had to make so many quiches as practice that I’ve not cooked one since, but perhaps now that 2 years have passed, I should give it another try. Jenny over at Silver Screen Suppers has also made it, and we’re in agreement that it’s a mighty fine quiche.

As well as being Hitchcock’s, or rather his wife Alma’s, recipe Quiche Lorraine also features in To Catch a Thief (1955). The film is set on the French Riviera and stars Cary Grant as retired jewel thief John Robie aka ‘The Cat’. When diamonds start getting stolen from wealthy hotel guests, Robie has to prove his innocence while romancing cool blonde Grace Kelly (who’s secretly very excited by the idea he might be a criminal). 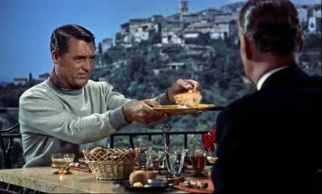 Insurance man Hughson (John Williams) joins Robie at his villa for lunch, where he’s seduced by the ex-thief’s relaxed Mediterranean lifestyle. Quiche Lorraine, prepared by Robie’s housekeeper, is served on the sun-soaked terrace and washed down with cold white wine. Robie explains that the secret to the lightness of pastry is the housekeeper’s delicate touch. In typical Hitchcock style, the scene is darkly undercut when Robie goes on to reveal that she strangled a German general during the war – so effectively that he didn’t make a sound….