I’m super excited about Teenage Kicks, the BFI’s summer season of teen movies which is now on. They’re showing one of my favourite films – Heathers (1988), a very black comedy about murder, suicide, eating disorders and hating your best friends. It stars Winona Ryder and Christian Slater (in his best young Jack Nicholson mode) as Veronica and JD, two love struck teens who end up bumping off fellow students and making it look like they’ve committed suicide. 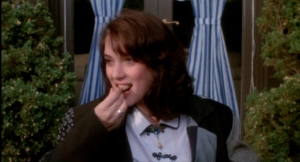 Heathers might seem an unlikely candidate to feature here, but it’s not all about poisoning people with blue liquid drainer. The film features and uses food in a range of ways  – from the disgusting school canteen dinners, to flirtatious dialogue over convenience food, to Veronica’s parents ritualised eating of pâté. 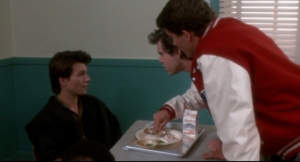 Following the fantasy opening sequence during which the three colour co-ordinated Heathers (Chandler aka Heather No. 1 [red], Duke [green], McNamara [yellow]) play croquet and Chandler viciously aims her ball at Veronica’s head, the film cuts to lunchtime at Westerburg High. Eating is probably one of the least important activities taking place, which is not surprising given how horrible the food looks. Heather Chandler asks Veronica to forge a love letter to Martha Dunnstock (aka Martha Dumptruck), an overweight fellow pupil. While they wait for Martha to embarrass herself by presenting the note to its supposed sender, Heather and Veronica conduct a lunchtime poll (‘you inherit five million dollars on the same day that aliens land on the earth and say they’re going to blow it up in two days. What do you do?), while other students smoke weed, discuss bulimia (“Grow up Heather, bulimia’s so ’87”) or collect leftover lunch money to feed the developing world. It’s while conducting the poll that Veronica meets JD for the first time, before that day’s lunch break concludes with him firing a gun in the cafeteria to scare bullies Kurt and Ram.

“I see you know your convenience speak pretty well…”

They next meet that evening at a Snappy Snack Shack where Veronica has been instructed to pick up corn nuts by Heather Chandler, en route to a university party. “You gonna pull a super chug with that?” [I have NO idea what this means] asks JD, as Veronica selects the corn nuts (BQ, not plain). Veronica, getting into the swing of things replies, “No, but if you’re nice, I’ll let you buy me a slushie”. She continues: “I see you know your convenience speak pretty well…”

JD explains that Snappy Snack Shacks have been one constant during an itinerant life moving around with his father: “There’s always been a Snappy Snack Shack. Any town, any time. Pop a ham-and-cheese in the microwave and feast on a turbo dog. Keeps me sane.” (but not that sane, it transpires). As they talk Veronica seductively sucks on a stick of red liquorice and she lets JD buy her a cherry slushie (which in classic American style is almost the same size as she is). 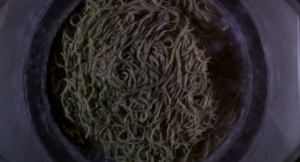 Although Veronica can ably indulge in the flirtatious rituals of ‘convenience speak’ her favourite meal is actually spaghetti ‘with lots of oregano’. She’s haunted by a dish of this during her dream of Heather Duke’s murder/faked suicide and funeral. The spirit of Heather Chandler appears, bored and dismissive as usual: “Is this turn out weak, or what? There were at least seventy more people at my funeral”. After lamenting the dullness of the afterlife, she then plunges Veronica’s head into the spaghetti, jolting our heroine from her dream.

“Take a break Veronica, sit down”. The Sawyers daily pâté ritual on the terrace.

A world away from corn nuts and Turbo Dogs, is Veronica’s parents fondness for pâté. They appear to have a daily evening ritual of pâté on the terrace, which also enables a brief but superficial catch up with their daughter before she rushes off to the next party/funeral (“Great pâté, but I gotta motor if I want to be ready for that funeral…”). Their pseudo-European sophistication sets them and Veronica apart from the all-American lifestyle that surrounds them.

Another way in which food and drink is used as a signifier is through the film’s use of mineral water drinking to denote male homosexuality. Accompanied by a Joan Crawford postcard, a bottle of mineral water placed at the scene of Kurt and Ram’s double ‘suicide’ is supposed to provide the final proof of their gay suicide pact. In Daniel Waters’ original script, the water was explicitly Perrier but the company refused to let its name be used and in the final film it remains brandless. Likewise, the Snappy Snack Shack was originally supposed to be a 7-11. The filmmakers had the rights to use the 7-11 name but at the last minute the company changed their minds, necessitating the invention of the Snappy Snack Shack, the slushie (to replace ‘slurpie’) and the ‘Turbo-Dog’.

Last night we had a Heathers-themed dinner, of spaghetti, with lots of oregano, followed by a cherry granita (basically a posher, more frozen version of a slushie, right?). Upon reflection, a darker, richer, tomato sauce might have been more in keeping with the tone of the film, but this one (made with fresh tomatoes, olive oil, white wine and fresh oregano and basil) went nicely with the cherry granita to follow.

Skye Gyngell’s recipe for cherry grantia can be found here.

Beware! If you want to make this, its definitely worth investing in a cherry stoner. You should also allow plenty of time for it to set. I made mine (a half quantity) early afternoon and it still could have done with a bit more time in the freezer when we ate it at 10pm.

If you’d like to bump this up into 3-courses, I’d recommend (of course) some pâté on toast to start. To drink? Why, mineral water of course…

Heathers is showing on August 20 and 22 at BFI Southbank