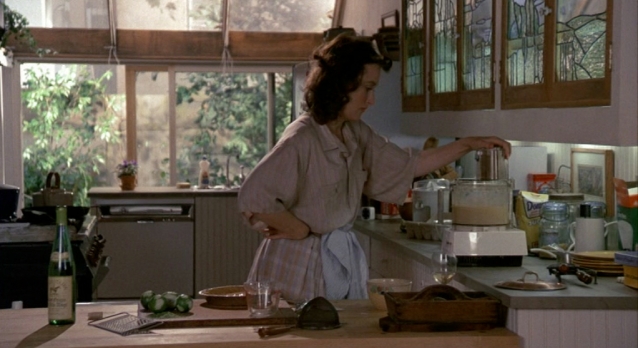 Heartburn is chock full of food. Its heroine, Rachel Samstat (Meryl Streep) is a cookery book writer and Nora Ephron’s 1983 novel (which she adapted for Mike Nichols’ screen version) is full of asides in which Rachel discourses on the life-affirming qualities of potatoes, or offers up recipes for cheesecake, vinaigrette, bacon hash and peach pie.

Food is central to the narrative of the film too, although this doesn’t contain the recipes and conversational instructions that pepper the novel. In the book, food triggers memories or reflects emotions as the pregnant Rachel discovers her journalist husband Mark (Jack Nicholson) is cheating on her. In the film, meals and drinks punctuate the couple’s blossoming – and then disintegrating – romance. 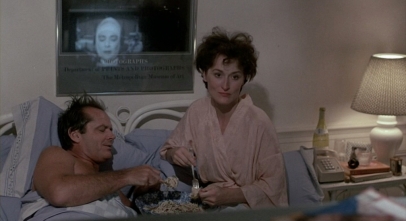 After their first meeting at a friend’s wedding in New York, Mark, a notorious womaniser (“he’s very single”) asks Rachel for a drink. They depart the wedding and soon end up in bed together. Rachel knocks up a 4 am post-coital spaghetti which the couple eat in bed from the same oversize bowl, while watching a movie.

It’s a lovely and memorable moment which brings together Rachel’s two passions: cooking/eating and Mark. Nigella Lawson mentions this scene in How To Eat, by way of introduction to her recipe for spaghetti carbona (she evocatively describes Mark and Rachel’s bedroom meal as a ‘chin-dripping, love-soaked primal feast’).

PIzza – eaten with the aid of a bricklayer’s trowel

Mark responds that when they’re married he wants this once a week. Cut to their wedding (where Rachel has to overcome severe cold feet before eventually saying ‘I do’), before moving swiftly to their new home in Washington. The house is something of a fixer-upper (“We got a good price on it… they had a sort of… fire….”, Rachel tells their friends). The walls are bare and hollow, the kitchen is only accessible by going out into the back garden and the roof constantly drips water. Cooking is impossible and the first meals we see eaten in the house are Chinese takeaway and pizza (eaten from the box, with the help of a brick trowel), while the couple bicker about the state of the house, the inadequacies of their Hungarian builder and Rachel’s dislike of the Washington social scene.

Following the birth of their first child, things settle down, at least for a while. Heartburn is famously based on Nora Ephron’s own marriage to Carl Bernstein (of All the President’s Men fame). Bernstein had an affair with the wife of the British ambassador, while Ephron was pregnant with their second child. Ephron worked this betrayal out of her system (and had sweet revenge) by writing Heartburn, which depicts him as vain, selfish and ‘capable of having sex with a Venetian blind’. “Obviously, I wish Nora hadn’t written it”, Bernstein has been quoted as saying.

Jack Nicholson is perfect casting as a larger than life romantic villain who can be both charming, cruel and self-absorbed (while Heartburn was being made he was busy cheating on his long-term partner Anjelica Huston). Some of his petulant behaviour is demonstrated through food. During a picnic he brutally rips the leg off a whole roast chicken and starts eating it, even though the meal hasn’t yet begun. This sparks an argument between him and Rachel, and indicates that trouble is brewing. After Rachel discovers evidence of his affair she returns to New York, professing their relationship to be over while secretly hoping he will come to win her back. 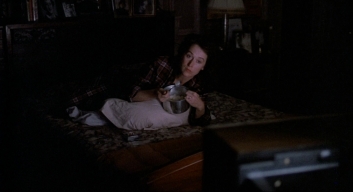 While waiting for him to turn up, she eats mashed potato straight from the saucepan – the ultimate heartbreak comfort food (right).

When the couple do reconcile (after a slightly half-hearted attempt from Mark), they fall back into the rhythms of everyday life. We see Rachel serve chicken stuffed with lemon, linguine with clam sauce and pork chops with mustard and cream. But although Mark has promised not to see Thelma Rice, his lover again, all is not well. Rachel is unable to trust the man she loves and when she discovers he has bought Thelma an expensive necklace it’s the last straw. The climax of their relationship comes with the making – and throwing – of a Key lime pie. 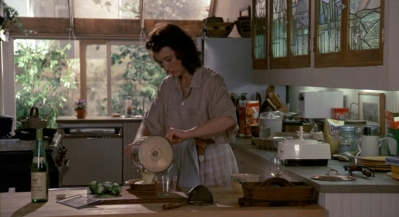 Nora Ephon was almost as well-known for her cooking as for her filmmaking and writing. In the book of Heartburn she gives many recipes, including one for the fateful Key lime pie. This is probably not the exact method followed by Rachel in the film. This version appears to use as pastry crust, the filling is made in a blender and doesn’t seem to be frozen (she carries it on her lap on the way to a dinner party, and removes it from the fridge, not the freezer, before spreading whipped cream on the top to serve).

There are a number of ways to make Key lime pie. The name comes from the semi-wild limes that grow on the coral islands (keys) off the Florida coast. Some use pastry, some use biscuits, some recipes tell you to bake the filling, some include yolks and whisked egg whites. The key ingredients however are simple: condensed milk, eggs and limes. 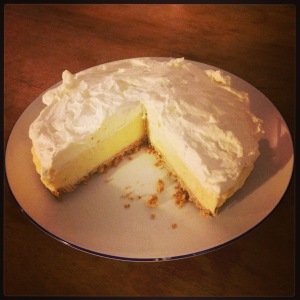 I made Ephron’s version from the book as part of a pre-Valentine’s Heartburn dinner and movie with my chum Hannah. There is a shocking amount of condensed milk involved, but the pie does serve around 8 people (the remainder is sitting in my freezer as I type). It’s delicious but you probably won’t need seconds.

Rachel Samstat’s/Ephron’s recipes are conversational, with lots of biographical detail. She is less interested in providing lots of detail on method and quantities. So in case you fancy giving it a try, here’s some extra information:

I made an 8 inch pie (I don’t have a 9 inch tin). For this I used 150g digestive biscuits, crushed and then mixed with 75g of melted butter. If you have a 9 inch tin, up the quantities slightly, keeping the same proportion of biscuit to butter (i.e. 2:1)

Gently but firmly press the biscuit mixture into your tin – it will be difficult to take it out if the mixture is pressed down too hard. I recommend using a tin with loose bottom. You willl be able to slide the frozen pie off the base and transfer it onto a plate for easy slicing and serving.

Beat the eggs well before adding the lime juice, milk and zest. A typical UK tin of condensed milk (397g) = a 14 oz can. The lime juice thickens the sharp and creamy eggy filling, meaning the pie doesn’t need to be baked.

I used 6 limes for my pie so I’d suggest 6/7 for the recipe above. Roll the limes first to help extract more juice. In her Fruit Book, Jane Grigson recommends pouring boiling water over the fruit and leaving it to stand for five minutes before squeezing. She says this will also produce more juice.

Our verdict on the pie was that it was delicious – a pleasure denied the characters in the film as Mark gets the pie, whipped cream and all, flung into his face. Equally satisfying but in a very different way.

For the rest of the meal, I took inspiration from the film and the book. To start: salted almonds (I couldn’t get hold of the blanched that Ephron’s specified but whole with skins worked very well too). 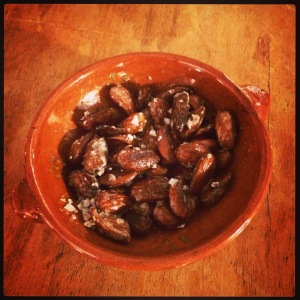 You melt some butter in a frying pan, add whole blanched almonds, and sauté until they’re golden brown with a few little burned parts. Drain lightly, and salt and eat with a nice stiff drink.

To follow, home-made pizza (not takeaway so not truly authentic to the film) with a salad dressed with Rachel’s famous vinaigrette. The vinaigrette doesn’t make an appearance in the film but is prepared as follows. By sharing the recipe with Mark, Rachel makes a gesture of forgiveness before leaving him for good.

Conclusion: Nora Ephron’s recipes are delicious and easy to make. She has my respect as novelist, screenwriter, director and cook. For a perfect evening in with a girlfriend combine the above menu with a viewing of the film and plenty of wine. Cook to a Carly Simon soundtrack. For a midnight bedroom feast with your loved one, try Nigella’s spaghetti carbonara.