Making breakfast has never looked so hard as it does at the end of Woman of the Year (1942) when steely and independent Tess Harding (Katharine Hepburn) tries to prepare coffee and waffles for her estranged husband, Sam Craig (Spencer Tracy).

Tess is a cultured and successful political correspondent – so successful she wins the honour of ‘woman of the year’. By valuing her professional life over the domestic, she alienates her down-to-earth husband sports columnist Sam who feels both intellectually inferior and neglected.

The role of Tess is emblematic of the strong and seemingly uncompromising women Hepburn is known for (and her character’s last name is an in-reference to Hepburn’s long-term friend and companion/lover, Laura Harding). But as in other roles such as Tracy Lord in The Philadelphia Story, Hepburn’s character is taught a lesson and forced to change her ways. By the late 30s Hepburn was dubbed ‘box office poison’ and it was believed audiences wanted to see her taken down a peg or two. The veracity of this idea was seemingly supported by the success of The Philadelphia Story and it happens again at the end of Woman of the Year when we see the educated and multi-lingual Tess flail desperately in the kitchen, despite being aided by a housekeeping manual detailing ‘a thousand ways to win a man’s heart’. 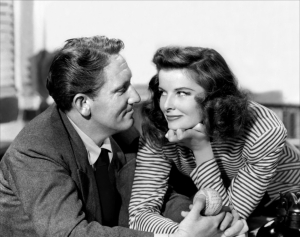 As originally written, Tess’s capitulation was going to be symbolised by her finally embracing her husband’s love of baseball. However, this wasn’t deemed feminine (and therefore satisfying) enough, and the last fifteen minutes of the film were duly re-written to add in this kitchen scene. Despite being ideologically dubious, it’s actually a truly hilarious sequence and demonstrates Hepburn’s knack for comedy. I saw it last night at the BFI and it had the audience in stitches (as did The Philadelphia Story, screening immediately afterwards). I’m sad it’s not available as a YouTube clip because my description really can’t convey how funny the scene is.

Sneaking into Sam’s new house early in the morning, Tess decides to prove her love and her willingness to change by making him breakfast in bed. First she grapples with the Cona coffee maker, putting (an excessive amount of) coffee in the bottom and the water in the top (which, as Kathleen Byron could have told her, is the wrong way round). Tess then turns to a housekeeping book gifted to her by her mother-in-law, who has obligingly highlighted and annotated Sam’s favourites. Turning to the page on waffles Tess decides to give them a go. 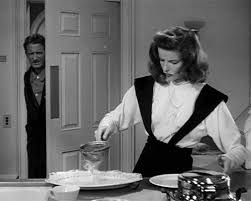 She’s cavalier with her quantities as she measures out flour and baking powder, and then struggles to separate eggs. First she tries cracking them onto a plate and draining the white off. This fails and she ends up with egg on her glamorous open-toed shoes. She next tries to strain them through a sieve, with some measure of success (this bit is genius as performed by Hepburn).

When she turns her back, a waft of air causes the book’s pages to flip over. Tess doesn’t notice it’s turned to another recipe and continues on oblivious, adding a new host of ingredients, including fresh yeast, to the recipe. Hilarity ensues as the scariest waffle mix known to woman starts to expand and do very strange things in the waffle iron.

Unbeknownst to Tess, Sam is woken up by the odd sounds coming from the kitchen. He watches her for a while, seemingly charmed and dismayed in equal measure by her inadequacy in the kitchen. Her efforts are not enough to win him over though; he tells Tess he’s disappointed in her and doubts her sincerity in wanting to give up her job and become a stay-at-home wife. Giving promise for their future together, Sam tells Tess he doesn’t want this but does want her to find a compromise between her work and their life together.

The notion of Tess trying to learn to cook for Sam mimics that of Hepburn and Tracy in real-life. Kate was more dextrous in the kitchen than Tess (she made a mean chocolate brownie) but she did learn to cook for Spence, and was particularly good at steak because it was his favourite. She devoted herself to Spencer during their 26-year relationship (which ended with his death in 1967) and to a certain extent did subsume her needs to his. The couple never lived together, but as they avoided being seen in public together, especially in restaurants, they no doubt enjoyed many of Kate’s home-cooked meals together.

20 March: Since posting the above, I also wrote a piece for the BFI on Katharine Hepburn’s legendary brownies. I’m pleased to report that these are DELICIOUS. If you fancy giving them a try, the recipe can be found here. Like Hepburn and Cukor I did end up eating one (or two) for breakfast (nuts are nutritious though, right?). 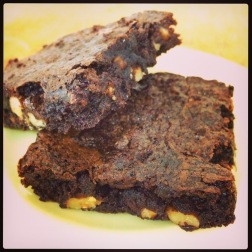