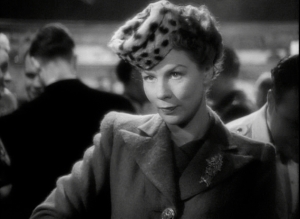 On Thursday my friend Julie and I enjoyed a decadent evening at the American Bar at the Savoy. It was Jules’ birthday and we figured if we skipped dinner and made do with the (plentiful) olives and nuts, a cocktail or two would cost no more than going out for a meal.

One of the cocktails on the Savoy’s ‘anniversary’ menu (celebrating 125 years since the hotel opened) is ‘The Queen’s Coronation’. Its combination of gin, Dubonnet, suze (French bitters), Earl Grey syrup and Peychard’s bitters reminded me of a piece I wrote for the late, lamented Gin and It which never made it into print due to magazine folding. Rather than languishing on my computer, I thought I would publish it here. There is possibly more about Dubonnet than about the film, but I beg you to indulge me, and perhaps even give Dubonnet a try.

The film: Powell and Pressburger’s superlative I Know Where I’m Going! one of the most romantic and Romantic films of all time. The drink: Gin & Dubonnet. The drinker: Joan Webster (Wendy Hiller), a suitably regal lead (although of course the film pre-dates the Coronation).

Joan (to her Father): “Oh, but you must have something tonight. (To waiter) He’ll have a sherry. You know you love sherry”.

Waiter: “And the usual for you Miss Webster?”

Father: “What do you mean, the usual?”

Father: “You have no consideration whatever for my position”

Joan: “Oh darling, be reasonable. Just think of all of these girls here, they’ve all got fathers who have positions”

Now best known for being the tipple of choice of HM the Queen and the late Queen Mum, it’s hard to imagine a time when gin and Dubonnet could be considered a racy and exotic concoction, as it is in one of my favourite films, the 1940s British classic, I Know Where I’m Going! Admittedly, the alarmed party is the provincial bank manager father of heroine Joan Webster (played by stage and screen actress Wendy Hiller), a man for whom a glass of sherry signifies a wild night out, but his daughter’s choice of drink is nonetheless representative of her independence and sophisticated veneer.

It’s wartime. Father and daughter are meeting in a glamorous nightclub-restaurant, complete with off-duty officers in uniform, slick cocktail barmen and classy swing band. Mr Webster is clearly out of his element, while Joan is fully within hers. Wearing a chic skirt suit with matching ocelot hat and handbag, she’s on familiar terms with the waiters (“the usual for you Miss Webster?”) and the relationship between this older man and imperious young woman is at first unclear.

Joan calls him ‘darling’ and it’s only gradually revealed that he’s her father as well as her bank manager. If Mr Webster is mildly shocked by Joan’s order and brisk knocking back of a gin and Dubonnet, he’s even more alarmed when she announces that she’s about to marry her boss, Sir Robert Bellinger, one of England’s wealthiest industrial magnates. ‘He must be almost as old as I am’, her father muses in dismay. ‘And what’s wrong with you darling?’, Joan retorts.

Invented in Paris by chemist Joseph Dubonnet, and first marketed in 1846, Dubonnet was created in response to the French government’s need to find a palatable and enjoyable way for soldiers in the colonies to consume quinine, the anti-malarial drug of choice of the 17th to mid 20th centuries. It uses a red wine base of Grenache, Muscat and Carignan grapes, fortified with grape brandy and flavoured with coffee beans, orange rind, cinnamon, chamomile and other secret herbs and spices.

Dubonnet’s concoction so successfully masked quinine’s bitter taste that Madame Dubonnet began serving it to family and friends and the drink soon became a favourite of legionnaires and civilians alike (Madame’s cat was incorporated into Dubonnet’s advertising and remains the brand’s logo up to the present day).

According to the Dubonnet website, by 1900 over three million bottles were being produced each year and were exported worldwide. (American) references to the Dubonnet Cocktail began appearing from1908 onwards. It was promoted as a cocktail for discerning ladies and in 1914 was committed to print in Jacques Straub’s book, Drinks, as being made up of half gin and half Dubonnet with a dash of orange bitters. By the time the Dubonnet Cocktail appeared in The Savoy Cocktail Book in 1930 it was simply half dry gin and half Dubonnet.

Savoy proportions but made at home: half gin, half Dubonnet with a twist of lemon and plenty of ice

Dubonnet was a fashionable aperitif amongst British society at this time. Queen Elizabeth, later the Queen Mother, became a famous proponent of a gin and Dubonnet before lunch (she remained a fan throughout her long life and in 2008 a note in which she requested two ‘small’ (her emphasis) bottles of gin and Dubonnet for picnic was sold at auction for £16,000). The combination stayed modish and prevalent in popular culture throughout the 1930s and 40s. Noel Coward referenced it in his song, ‘I Went to a Marvellous Party’, in 1938:

‘We knew the excitement was bound to begin

When Laura got blind on Dubonnet and gin’

By the time Joan Webster orders her gin and Dubonnet in I Know Where I’m Going!, the drink’s association with the aristocracy, and its status as a ladies’ drink, made it the perfect choice of beverage for a character who is a thoroughly modern miss and an aspiring social climber. After her cocktail, Joan preens in front of her compact mirror, to the exasperation of her father who reminds her that she’s not Lady Bellinger just yet. 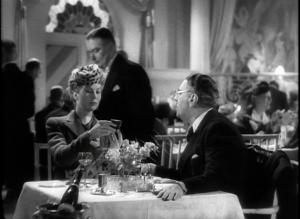 This brings her back down to earth and prefigures the film’s narrative move away from cocktails and jazz and up to the remote Scottish Hebrides where Joan begins to question her modern values and formerly defining sense of knowing exactly where she’s going. Whether or not she gives up gin and Dubonnet remains an unanswered question (whisky is of course a more appropriate drink on the Isle of Mull), but it’s certainly true that other drinkers have shunned this French aperitif a base du vin since its 1940s heyday.

Along with Campari and Cinzano, Dubonnet suffered from a fantastically naff advertising campaign in the 1970s and 80s (type ‘Pia Zadora’ and ‘Dubonnet’ into YouTube to see for yourself). It’s now seen as being primarily an older person’s drink that’s failed to attract a new generation of imbibers. A 2009 BBC news feature pointedly asked ‘Who still drinks Dubonnet?’ suggesting that the Queen was emblematic of the ageing and dwindling demographic who still enjoy the drink.

But like Campari, which was desperately unfashionable a few years ago, Dubonnet could well be ripe for a revival. Drunk in Savoy proportions (as opposed to the Queen Mother’s 70% Dubonnet to 30% gin), perhaps with a dash of bitters a’ la Jacques Straub, it makes for a warming alternative to a pre-dinner Gin & It, or a less bitter and potent substitute for a Negroni. Try it over ice with a twist of lemon or orange – but just don’t expect it to shock your parents.