Since seeing Phantom Thread just before Christmas I haven’t stopped thinking about it. Not just because it’s a richly crafted film about passion, creation and obsession, but because it’s also – as you’ll no doubt be unsurprised to hear coming from me –  a film about food and appetite. Indeed this is a thread (cue dressmaking puns) that a number of reviewers have picked up on in their reviews (see online pieces in the New Yorker and Bon Appetit for instance). The film was released in the UK on Friday so I went to see it again yesterday at my local cinema, the Genesis on Mile End Road. I treated myself to a ticket in their comfy studio screen, and made sure I ate lunch first.

London, 1955. Couturier Reynolds Woodcock (Daniel Day-Lewis) is a man of fastidious habits and particular tastes. Dinner is always in the same restaurant, at the same table. He eats asparagus with oil, definitely not butter. He likes a martini before dinner and dislikes (most of the time, at least) pastries for breakfast. He’s also something of a serial monogamist, a Bluebeard figure who casts off one woman after another once he’s exhausted the bout of creative passion they’ve inspired.

We’re introduced to Reynolds during his careful morning routine of dressing and grooming, before descending with him into the cold morning light of the breakfast room. His sister Cyril (Lesley Manville) is there, as is his current girlfriend Johanna (Camilla Rutherford). Unfortunately Johanna fails to heed the maxim of the House of Woodcock – that if breakfast is not right the rest of the day is ruined – and after annoying Reynolds over his tea (“I really cannot begin my day with a confrontation” he harrumphs) we know her days are numbered.

Breakfast is, of course, the most important meal of the day, and as this early scene demonstrates it is especially so for Reynolds. Breakfast time is when he gets his ideas in order, sketching dresses over a calm pot of tea before donning his white coat and joining the cutters, seamstresses, fitters and finishers at work upstairs in his Mayfair townhouse. Away from work though, it’s a different story.

After driving all night to get to his country house, Reynolds stops for breakfast at a hotel where a young and seemingly gauche waitress, Alma (Vicky Krieps), catches his eye and arouses his appetite (hunger and passion are frequently linked throughout the film). Reynolds impresses Alma with both the particularity and size of his appetite as he orders Welsh rarebit with a poached egg, bacon, scones with cream and jam (“Not strawberry!”) and Lapsang souchong tea. “And some sausages”, he adds as an afterthought. As so often in film, flirtation is conducted over food as Reynolds, with a twinkle in his eye, takes away her carefully-written list and asks “will you remember all that?”. It’s a challenge that Alma more than rises to, setting the tone for the power struggle of their relationship across the rest of the film.

Reynolds invites her for dinner and Alma immediately accepts, returning soon after with a note addressed ‘to the hungry boy’ (how on earth did Reynolds survive rationing?). Meals will thereafter be the key arena in which the emotional power struggle of their relationship is acted out, and, as in Citizen Kane, it is the breakfast table which takes on particular significance. Soon after, taking her place at the House of Woodcock’s daily breakfast ritual, Alma’s noisy scraping of butter onto toast jars Reynolds’ nerves. Unlike her predecessor/s though, Alma stands her ground, asserting that Reynolds is just too fussy (which he clearly is). Cyril, quietly sipping her tea after finishing her boiled eggs (her breakfast of choice), waits for Reynolds to huff off before warning Alma that breakfast is a sacred time for her brother. Later, Reynolds is barely able to conceal his disgust at Alma’s noisy slurping of cereal – even though they’re on their honeymoon.

But Reynolds’ mood at breakfast – and his appetite – can vary wildly. After their triumphant reclaiming of drunken heiress Barbara Rose’s wedding dress, Reynolds’ passions are inflamed. At breakfast the next morning he cheerfully asks for bacon and eggs, before deciding he’d also very much like some porridge. ‘Do we have cream?’ he asks, hopefully. Happily they do, and conviviality reigns as he offers porridge to Alma and instructs his housekeeper to not forget the all-important salt, while Cyril purrs about the delights of cream in porridge. I ate porridge every day for a week after this.

Perhaps more bizarrely, I also quite fancied a mushroom omelette. Alma likes to cook for Reynolds as a way of showing her love and asserting some element of control over their life together. An early attempt at this results in disaster. Reynolds takes umbrage at being surprised with a romantic dinner, comparing her lovingly cooked meal to an assassination (‘Do you have a gun?’, he demands indignantly) and throwing down his asparagus spear in disgust (Alma has wilfully served it with melted butter, not his preferred oil and salt).

But with the aid of some foraged mushrooms, Alma turns the tables. The second and last time we see her cook for him it is still a gesture of love, just one with a much darker purpose. The scenes of preparation and cooking are lovingly shot, invoking all of the senses as the meaty mushrooms sizzle in butter (again, Alma knows Reynolds likes just a smidgen of butter, but she rebelliously adds two generous pats to the pan). She scatters some chopped chives into the wobbly eggs and then lovingly folds the omelette onto his plate, before sitting down to watch him eat…

For those with a penchant for the darker side of love, this would make an ideal Valentine’s supper, especially with some interesting (non-poisonous mushrooms). I couldn’t wait until I had an opportunity to cook this for my loved one and decided I simply had to make one for my lunch today. I could only get hold of shiitake mushrooms and my presentation would not meet Reynolds’ exacting standards, but it certainly tasted good. 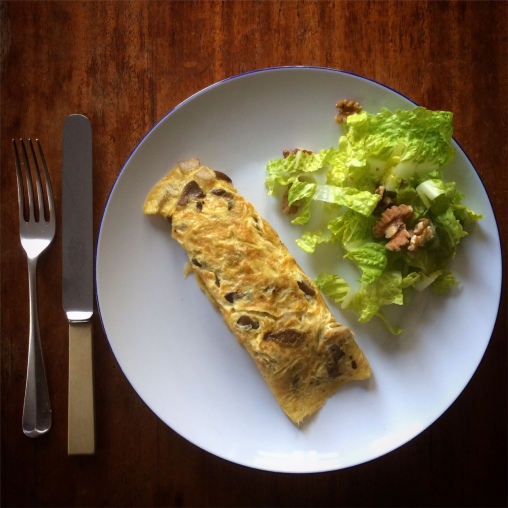 A final last aside: On the subject of table etiquette, I was surprised to see Reynolds cut his omelette and then transfer his fork to his right hand to eat. While it works for the choreography and composition of the scene, this seems out of character for such a quintessentially English gentleman of the time. Surely he would have kept it in his left? What do others think?